Weekend golfer whose goal is to always break 80.

Ashleigh Buhai finally got her first win on the LPGA Tour, winning the season’s final major at the AIG Women’s Open at Muirfield on the 4th playoff hole over In Gee Chun. Buhai started the final round with a 5-stroke lead but ran into trouble on the 15th, making a triple-bogey 7 to see her lead evaporate.

On the 4th playoff hole, with the sun pretty much set, Buhai made a clutch up-and-down from the greenside bunker to win the championship, her first in 15 years playing the LPGA.

An incredible moment on the 18th for Ashleigh Buhai, after 22 holes of intense competition on Sunday.#WorldClass pic.twitter.com/0r8gM5DDiW

“Show them why you’re number one in bunkers this year.”@ash_simon’s Tour leading sand save percentage gave her confidence to win her first major. pic.twitter.com/CFpsxDhZmU

For the LPGA Golf Pool, Betty was the top-earner for the week with 33 points.

Here are the final round highlights from the AIG Women’s Open Youtube page:

Ayaka Furue shot a course record 10-under par 62 in the final round to win the Trust Golf Women’s Scottish Open. Furue won the tournament by 3 shots over Celine Boutier and Hyo Joo Kim. The win was the first LPGA title for Furue, who is an LPGA rookie.

Welcome to the club 🏆

Ayaka Furue is in the clubhouse at 21-under and currently leads by three strokes in Scotland! pic.twitter.com/lSYaMpl3c5

A record setting performance from Ayaka Furue in Scotland! pic.twitter.com/N7mCAs9aal

In the LPGA Golf Pool, Pat Kelly leads the with with 35 points.

Here are some final round highlights:

Brooke Henderson recovered after a poor start to her final round with birdies on the the 14th, 15th and 18th holes to win the Amundi Evian Championship by 1-shot over LPGA rookie Sophia Schubert.  Henderson shot a final-round even par 71 to finish the tournament at 17-under par. The win was the second major championship title for Henderson, who became the only Canadian to win two professional major titles.

At one point in the final nine holes there was a 7-way tie for the lead.

FOR THE WIN @BrookeHenderson is a two-time major champion! 🏆🏆 pic.twitter.com/G2RAI2RMKs

In the LPGA Golf Pool, Steven Doerksen had 59 points to have the most points this week.


* denotes not part of LPGA pool

Brooke's scorecards this week! What a performance! pic.twitter.com/qpeSYdfSI7

Jennifer Kupcho and Lizette Salas teamed up to win the Dow Great Lakes Bay Invitational by 5-shots over the team of Matilda Castren and Kelly Tan in Midland Michigan. Kupcho and Salas finished at 26-under par for the tournament. This was Kupcho’s third win of the year, and for Salas it was her first win since 2014.

"I think we just have a lot of faith in each other. We make each other comfortable."@jenniferkupcho and @LizetteSalas5 fired a final round 61 to win the @DowGLBI.

A weekend to remember at the @DowGLBI! 🏆

For the LPGA Golf Pool, Josh Whitt managed to score a whopping 62 points for the week!


* denotes not part of the LPGA Golf Pool

Here are the highlights from the final round:

In Gee Chun had a record-breaking first round, and lead for the first 56 holes of the 2022 KPMG Women’s PGA Championship.  On the 57th hole, that’s when her rocky start and Lexi Thompson’s equally good start, allowed Thompson to tie Chun for the lead.  A couple of holes later and Thompson was in the lead and, for the first time in the tournament, Chun was the chaser.

Chun steadied herself after her shaky first nine and along with a couple of missed short putts by Thompson (one from 1.5 feet!), retook the lead and won the her 3rd major title by a shot over Thompson and Minjee Lee.

Chun had lead by 7 shots after the first round (she shot 8-under 64), five shots after 36 holes, and still had a 3-shot lead thru 54 holes. She finished the tournament at 5-under par.

In the LPGA Golf Pool, Tim Powell lead for the week with 39 points.

Here are some highlights: 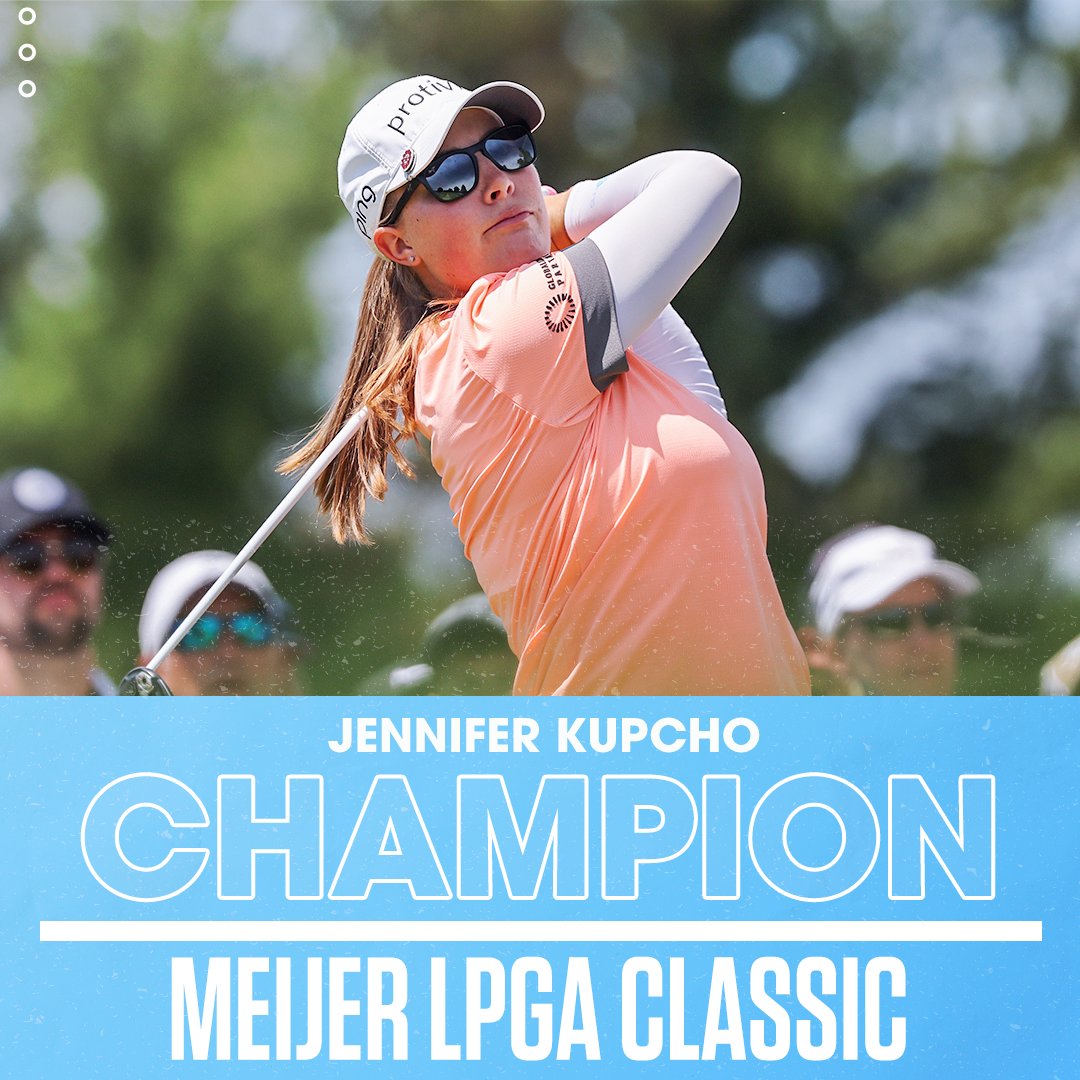 Jennifer Kupcho won the Meijer LPGA Classic, triumphing in a 3-way playoff with Leona Maguire and Nelly Korda. All three finished at 18-under par.

Two-time LPGA champion @jenniferkupcho was most proud of pulling away from a stacked leaderboard at the @MeijerLPGA 💪 pic.twitter.com/VWRz1N38rF

In the LPGA Golf Pool, Andrew Corner set the pace this week with 44-points.

Here are the final round highlights from the LPGA Youtube page:

Brooke Henderson, with a final round 7-under 64, came from behind to win the 2022 ShopRite LPGA Classic in a playoff over Lindsey Weaver-Wright. Both finished regulation at 12-under par.  The win is Henderson’s 11th on the LPGA Tour.

In the playoff, Henderon hit her second shot on the par-5 18th to within 7 feet of the pin, and proceeded to make eagle to seal the victory, as Weaver-Wright managed only a par.

In the LPGA Golf Pool, Gary Young earned the most points this week.

Here are the highlights from the LPGA’s Youtube page:

Minjee Lee, of Australia, won the U.S. Women’s Open by 4 shots over Mina Harigae at Pine Needles Lodge and Golf Club. Lee shot a final round even par 71 to finish at 13-under for the tournament.

Lee also takes home $1.8 million, the biggest payout in LPGA history. Harigae won $1 million for finishing runnerup. For comparison, the next event, the ShopRite LPGA Classic, has a total purse of $1,750,000.

As for the LPGA Golf Pool, Tim Powell was tops for the week with 42 points.

Here are the top shots from the final round from the USGA’s Youtube page:

And here are the extended highlights of the final round”