Weekend golfer whose goal is to always break 80.

The CME Group Tour Championship is the conclusion of the LPGA Golf Pool.

Congratulations to the winner, Andrew Corner who took the lead early in the season and then ran away with it.

The top 5 finishers, and a randomly selected person from the rest, all get prizes.

The top three all picked Lydia Ko. She lead all players with 124 points, more than doubling the next player in her group, Nelly Korda with 57 points.

The other critical pick to succeed was Atthaya Thitikul. The tour rookie was the only other player to earn over 100 points (101), and was 80 points ahead of Maja Stark (21), the next player in the group.

People getting prizes are:

and the random player (my wife picking a number between 6 and 58 without knowing the reason behind her pick):

After much consultation with my staff (i.e. friends) it was decided that each will receive a thebestdamngolfsiteperiod.com water bottle.

Thank you to everyone who participated. I hope this made you follow the LPGA just a little bit more, and you’ll be back for the 2023 version. The LPGA 2023 season is going to be bigger and better with more events and more prize money.

One last thing, please feel free to make a donation to All Paws Rescue Services.

Lydia Ko made birdies on the 16th and 17th holes to clinch a two-shot victory over Leona Maguire at the CME Group Tour Championship. Ko finished the tournament at 17-under, and the win earned her a $2 million cheque, the largest prize in women’s sports.

Ko finishes the 2022 with three wins for the season, and 19 wins for her career. This is also Ko’s second CME Group title, the first coming in 2014. She also captures the Rolex Player of the Year award, and the Vare Trophy (for lowest scoring average).

Who will take home $2 million?

.@ROLEX Player of the Year Lydia Ko speaks live to the media after winning $2 million at the @CMEGroupLPGA! https://t.co/oPoYSvsHrz

"I'm excited that my photo from winning here in 2014 with the glasses can get updated," she said. pic.twitter.com/R3Hed3kter

In the LPGA Golf Pool, Gary Young had the most points for the week with 41.


*indicates not part of the LPGA Golf Pool

There will be prizes for the top-5, plus one other prize to a randomly selected entrant. There will be another post annoucing the winners.

Thanks to everyone who took part. I hope everyone followed the LPGA just a little more closely.

Also, please feel free to make a donation to All Paws Rescue Group.

Nelly Korda a final-round 6-under par 64 to come from behind and win the Pelican Women’s Championship by a shot over Lexi Thompson.  Korda finished the tournament a 14-under par and became the first player on the LPGA Tour this season to defend the title they won in the 2021 season. With the victory, Korda also regained the number one spot in Rolex Women’s World Rankings.

A tough year for @NellyKorda but these are the moments that make it all worth it.

Soak it in, Nelly. ❤️ pic.twitter.com/dXte4YWgCm

I thought this was neat how Maja Stark was warming up before the final round:

And this is one of the great reasons to like the LPGA. The players all give plenty of time for the fans:

Here are the highlights from the LPGA’s Youtube Page:

Gemma Dryburgh shot a pair of 7-under 65s on the weekend to win the Toto Japan Classic by 4-shots over Kana Nagai. The win the Dryburgh’s first on the LPGA Tour.

In the LPGA Golf Pool, Patrick Horwood tops the week with 15 points. There are only two more tournaments left in the 2022 LPGA Golf Pool.


* indicates not part of the LPGA Golf Pool

Here are the final round highlights from the LPGA’s Youtube page:

Lydia Ko made five birdies on the back nine on her way to a four-shot victory over Andrea Lee at the BMW Ladies Championship in South Korea. Ko shot a final round 65 (7-under) and finished the tournament at 21-under par. The win is Ko’s 2nd on the season, and 18th of her career.

"It means a lot to win in Korea, where I was born. It makes it very special." – BMW Ladies Championship winner Lydia Ko ❤️ pic.twitter.com/SK6migLQCz

Former world no. 1, Na Yeon Choi, is calling it a career and announced the BMW Ladies Championship her final event. She went out with a highlight hole-in-one (and a new car).

In the LPGA Golf Pool, Kevin Chin and Allan Tilton had the best weeks with 30 points.


* denotes not in LPGA Golf Pool

Here are the final round highlights from the LPGA’s Youtube Page:

England’s Jodi Ewart Shadoff won the LPGA Mediheal Championship over Yuka Saso, capturing her first title on the LPGA in 11 years and 246 starts. Ewart Shadoff started the final round with a 4-shot lead, and held off challenges to claim a 1-shot victory.

A monumental moment for this champion.

In the LPGA Golf Pool, Ron Nezezon had the most points this week with 34 points.

Here are some highlights from the LPGA’s Youtube page:

Charley Hull won on the LPGA for the first time in six years with her victory at the Ascendant LPGA. Hull finished at 18-under par, after shooting a final round 64, one shot ahead of Xiyu Lin.

In the LPGA Golf Pool, Andrew Corner had 37 points to lead the week.

As per usual, here are the final round highlights from the LPGA’s Youtube page: 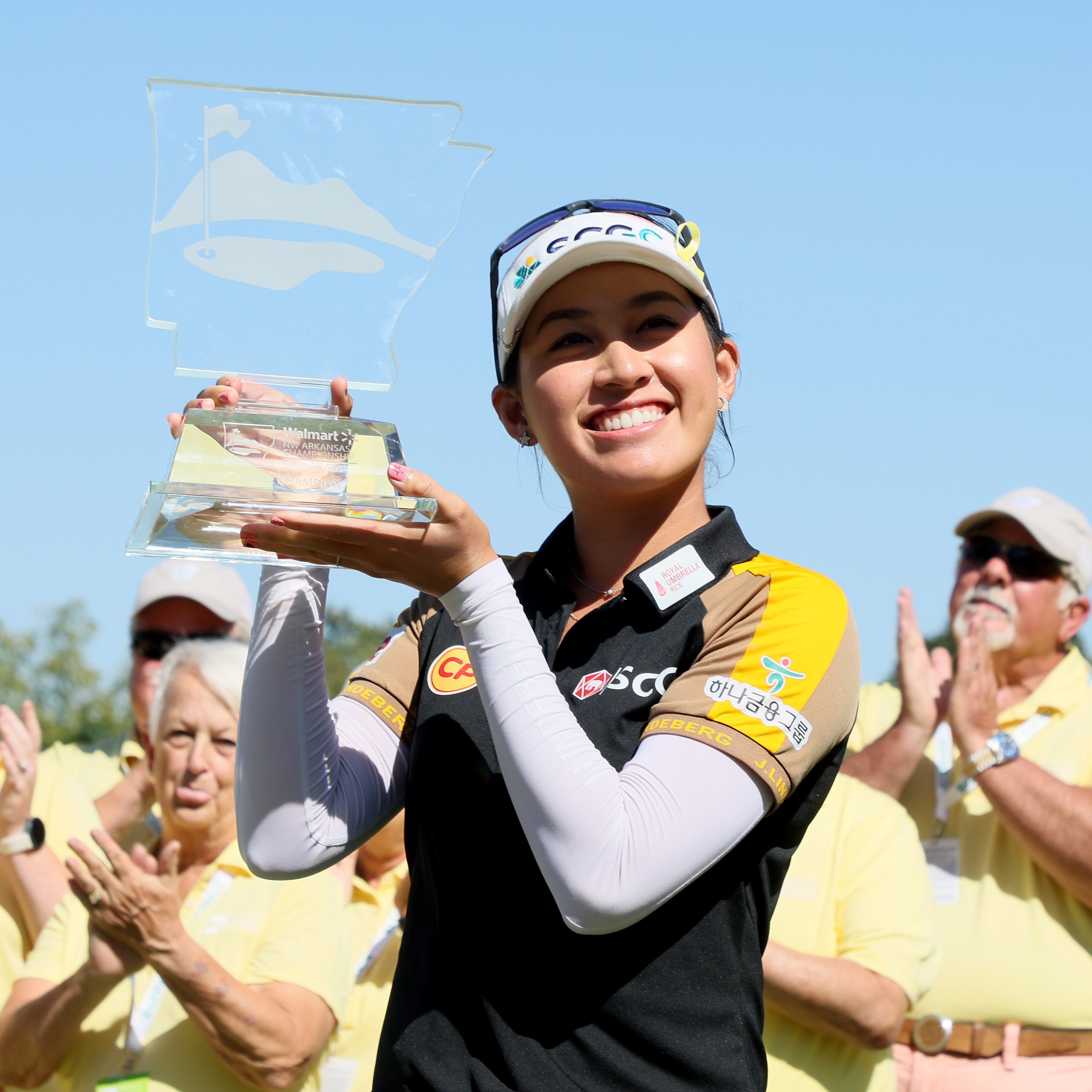 Atthaya Thitikul defeated Danielle Kang on the second playoff hole to win the Walmart NW Arkansas Championship.  Thitikul followed up her Saturday round of 10-under par with a 3-under 68 to get into playoff with Kang, who shot a final round 64, including a chip-in eagle on the final hole to briefly take the lead.

Thitikul then calmly made a birdie putt on the par-3 17th to get back into a tie for the lead. She had chances to win in regulation and the first playoff hole, before clinching the win with a birdie on the second playoff hole.

"I'm just really proud that I'm even here. These are tears of joy."

Here are highlights from the final round from the LPGA’s Youtube page: